The position of Kazakhstan in temperate latitudes (40-55C) determines the high values of solar radiation inflow to its territory.

The main component of the radiation balance is the total solar radiation. As we move from North to South, there is a significant increase in the arrival of solar total radiation.

Kazakhstan receives the largest amount of solar energy during the period June-August. In most of the Republic, the maximum solar solstice occurs in the month of the summer solstice – June, less often July.

This time of year is characterized by small gradients of radiation fluxes and the predominance of relatively thin clouds of the upper and middle tiers.

The total radiation falling on the earth's surface is partially absorbed, and the rest is reflected back into the atmosphere. The reflection coefficient depends mainly on the nature of the underlying surface. In winter, if there is snow, it reaches 70-80%, in summer - significantly reduced to 20-30%.

The main features of atmospheric circulation over Kazakhstan are formed under the influence of the General planetary circulation, local radiation conditions and features of the underlying surface. Large fluctuations in the circulation regime of the Northern hemisphere significantly affect the circulation developing directly over Kazakhstan. For example, an increase in zonal (West-East) circulation in the hemisphere as a whole leads to an increase in the West-East components of the movement of relatively fresh oceanic air masses to the territory of Kazakhstan. Kazakhstan is about 2000-3000 km away from the Atlantic ocean and its seas, but despite its deep continental position, the continental climate significantly decreases during these periods.

In summer conditions, due to the high moisture content, sea air masses coming from the West even in the Central, South-Eastern and Eastern regions of Kazakhstan retain significant humidity.

In the cold half of the year, with the establishment of a clearly defined West-East circulation, significant thaws cover the entire territory of Kazakhstan.

A significant influence on the circulation background is also exerted by the meridionally transformed planetary circulation, which causes intensive advection of warm air masses from the South and cold Arctic masses from the North on its territory.

Among the features of atmospheric circulation over Kazakhstan, it is necessary to include, first of all, the fact that approximately along its mid-latitude zone in the cold half-year usually passes the axis of the Western spur of the Siberian maximum, often connecting with the axis of the Eastern spur of the Azores maximum. This often continuous band of high pressure that crosses Kazakhstan from West to East causes a clear wind section for most of the year.

A very significant influence on the circulation processes of the atmosphere over Kazakhstan is exerted by the structure of its surface. Mountain ranges in the South, South-East and East have a certain influence on air currents on a global scale, being a natural barrier to the passage of cold air masses to the South. The influence of the mountains in the South and Southeast on the atmospheric fronts is obvious. For example, fronts approaching from the North slow down or become stationary. When approaching mountains, wave disturbances often occur on the fronts, which partially then develop to the stage of cyclones.

Surface Of Kazakhstan. The surface of Kazakhstan is extremely diverse. Most of the territory is represented by flat low-mountain areas, where there are extensive flat lowlands and depressions located in places below sea level. Significant areas of plateaus and low-mountain massifs. High-altitude areas with snow-capped peaks occupy the Eastern and South-Eastern outskirts of the Republic.

Wind regime. In the forest-steppe and steppe zones of Kazakhstan, approximately from Altai to mugodzhar, South-westerly winds prevail in winter, their frequency is 30-60% of the total number of observations without calm. Typical for the desert and partly foothill zones of the southern part of the Republic is the predominance of North-easterly winds (up to 60%), combined with a low frequency of winds of Western and South-Western points. In Western Kazakhstan, the greatest frequency of East and South-East winds is observed, but there is no pronounced predominance of one or another Rumba. This is due to the weakening of the Western spur of the Siberian anticyclone and frequent cyclone exits from the South of the Caspian sea and from the North-West.

The exception is the South-Western region of the Republic, the coastal zone of the Caspian sea, where East and South-East winds prevail(30-50% of cases in January), this is due not only to baric, but also to local thermal conditions. In winter, the waters of the Caspian sea are less cooled than the adjacent sandy deserts. In this regard, the tendency to transfer colder air masses from the desert to the Caspian sea is increasing.

In the warm season, the wind regime in Kazakhstan changes dramatically. At this time, the predominant removal of air masses from the extreme Northern latitudes of the continent to the Central regions. Under these conditions, North-westerly, Northern and North-easterly winds prevail on the territory of Kazakhstan (their frequency is 25-50% of cases in July).

During the transition periods of the year, Kazakhstan is dominated by the West-East transport of air masses.

In mountainous areas and in the coastal zone of large reservoirs, local winds are observed in summer. Breezes are observed on the coast of the Caspian and Aral seas, lakes Balkhash, Zaisan, and Alakol.

Mountain winds are observed shortly after sunset and continue until sunrise. During the day, the prevailing winds are directed from the valley towards the mountains. In the foothill zone, hair dryers are observed.

In mountainous areas, local winds are also observed, caused by the passage of cyclonic formations near the mountains. In the area of the Dzungarian gate in winter, the wind dominates the southern and South-Eastern directions, which reaches hurricane strength (up to 70 m/s).

Forest-steppe climate zone. Forest-steppe occupies a small part of the territory of the North of Kazakhstan. The southern border of the zone is determined mainly by the heat and moisture availability of the warm period of the year and a certain ratio of precipitation and evaporation during the summer period. The zone belongs to the most moisture-rich lowland regions of the Republic, but the evaporation rate here significantly exceeds atmospheric precipitation (2-3 times over the summer).

The average annual precipitation varies from 320 to 360 mm, with about 80% of the annual amount falling during the warm period.

The average temperature in January is -17°, with possible drops in some days to-42-48°, a small amount of winter precipitation. Winter is long and cold.

The zone is subject to intense Arctic incursions, causing late spring and early autumn frosts. At the same time, the rare passage of Western and diving, southern cyclones causes temperatures to rise to +5°in winter. The passage of cyclones in winter also causes increased wind, accompanied by blizzards and snowfall.

In the warm half of the year, the amount of precipitation increases sharply. The average temperature in July is 20°, the summer is moderately hot, but relatively short with a possible increase in temperature on some days to 41°.

Steppe climate zone. The steppe zone has a drier climate than the forest-steppe zone, and is characterized by an even greater excess of the ratio of evaporation to precipitation over the summer period from 3 in the North to 7 in the South.

Annual precipitation varies from 230 to 340mm. The maximum also occurs in the warm half of the year, when 65 - 80% of the annual precipitation falls. Average annual temperatures are positive (1°C), and they are higher than in the forest-steppe zone.

The climate is more continental in the Central part of the zone. In the Western region of the steppe zone, there is a more humid climate region, which is subject to more frequent southern, Western and North-Western cyclonic impacts.

The Eastern part of the zone is subject to anticyclonic effects and is less humid (except for mountainous areas).

The Western region of the zone has a shorter winter duration and a longer summer duration.

In the steppe zone, the share of winter precipitation is increased: up to 23-27% of the annual amount.

A special feature of the zone is that in clear weather and low temperatures, due to an increase in the baric gradient on the periphery of the anticyclonal field, strong winds and snowdrifts are possible.

The steppe zone is characterized by significant development of wind erosion. Within the steppe zone, the total number of days with dust storms during the warm period varies on average from 20 to 80 days.

Summer in the steppe zone is longer and hotter, but less humid than in the forest-steppe. The average temperature in July varies from 19° to 23°, with frequent temperature increases up to 40-42°C.

Semi-desert climate zone. Average annual temperatures vary from 6 to 8°C in the West and from 3 to 5°C in the center and East. Annual precipitation varies from 134 to 330 mm. For the zone, the predominance of warm period precipitation remains up to 55-70% of the annual amount, but to a lesser extent than for the steppe.

Within the zone, it is necessary to distinguish an independent area to the West of mugojar with milder climatic conditions and better humidity compared to other parts of the zone. Within it, in turn, one can distinguish the subdistrict adjacent to the Caspian sea and experiencing its greatest influence.

The Western region is located in the area of Atlantic, black sea, and partially Caspian cyclones, while the Eastern region is usually affected by southern cyclones (South Caspian, Murgab, and upper Amudarya). 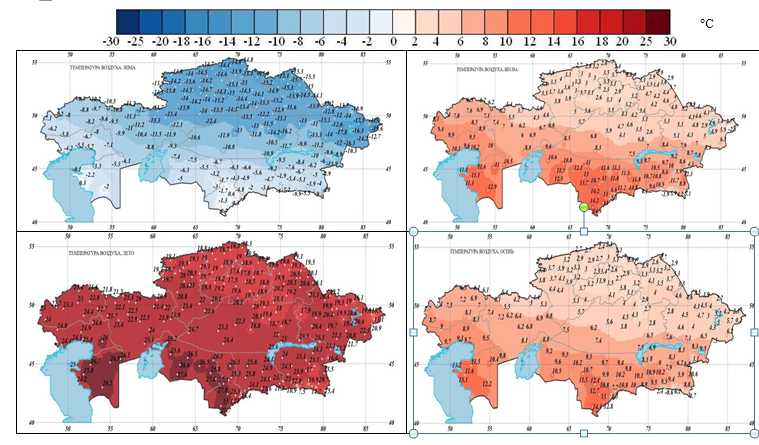 The Central part of the zone is exposed to North-Western and Northern cold intrusions and dry masses of Arctic air, designed as anticyclonal cores. 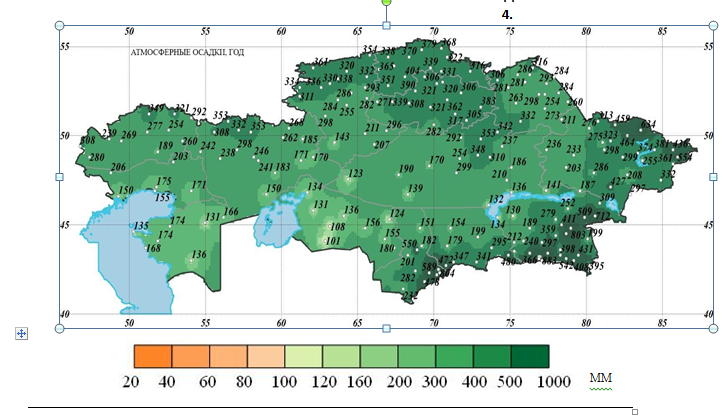 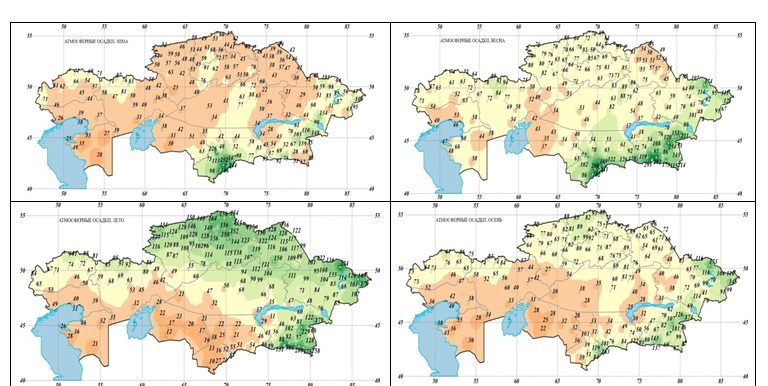 Thanks for the request
Our managers will contact you shortly